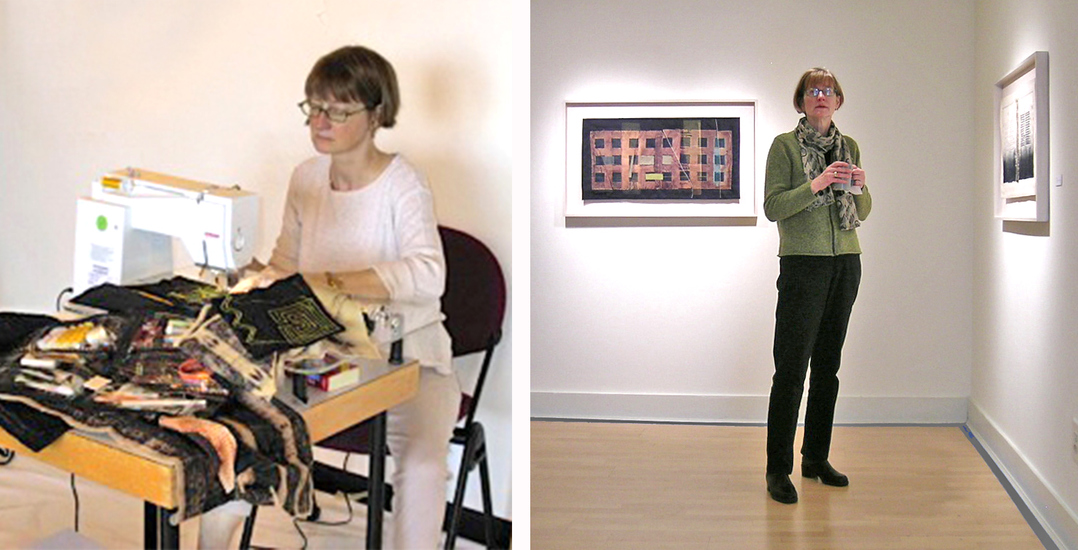 Judith Alice Dionne James was born on October 18, 1948 in Fall River, Massachusetts. She attended public schools in Somerset, MA and then studied graphic design and photography at Southeastern Massachusetts University (now the University of Massachusetts at Dartmouth), from which she received a Bachelor of Fine Arts degree in 1970. She taught briefly in the Falmouth, MA public school system before launching what would be a twenty-five year career teaching sewing and tailoring in the Fall River area.
In 1990 she and a longtime friend and business partner, Kathleen Davis, opened “The Fabric Studio”, a retail apparel fabric and sewing center in Swansea, MA. They sold the business in 2000 when Judith relocated to Nebraska with her husband, textile artist Michael James.
Judith developed as a studio artist relatively late in life, after a long career in the home sewing industry. After settling in Nebraska Judith studied textile design at the University of Nebraska–Lincoln, and received her Master of Arts degree in December 2002.  Over the next eight years she created a body of work heavily inspired by the landscapes of the Plains. Through mostly abstract imagery, she explored the ways in which human industry marked and altered the topographies of the wide central US.  “My work evokes idiosyncrasies in the landscape-at-large,” she wrote. “The unpredictable and serendipitous effects that my fabrics reveal are turned to the act of communicating my feelings about place.”
Her work was exhibited throughout the U.S., including at the Snyderman-Works and Gross McLeaf Galleries in Philadelphia, and in England, France, Switzerland, and South Korea, where in 2007 her work was included in a U.S. Department of State “Art in Embassies” installation in the U.S. Ambassador’s residence and in a related four-artist show at Seoul National University Museum of Art.
Between 2002 and 2009 Judith taught textile design and foundation design courses as a visiting lecturer in the Department of Textiles, Clothing and Design and also in the Department of Art & Art History at the University of Nebraska–Lincoln.
Family and friends described her as warm, gentle, and understated. She carried herself with dignity and without pretension. Her skills as a seamstress and tailor, developed over her lifetime, were exceptional and in that domain she was a perfectionist. She had a highly developed sense of personal style and she succeeded in transferring that sophisticated vision to the complex textile artworks that she created between 2000 and 2010. Her students described her classes as “comfort zones” where they felt supported and encouraged while always being expected to meet her exacting technical standards. Her calm exterior masked a fierce determination.
Judith was diagnosed with younger onset Alzheimer’s disease in 2009. Her final studio works were completed in 2010. She died of complications of the disease in August 2015.

All artwork © The Estate of Judith Dionne James