Judith James
(b. 1948 Fall River, Massachusetts; d. 2015, Lincoln, Nebraska)
“I think of my work as ‘moments of awareness’ in two senses: awareness of idiosyncrasies in the landscape at large, and the unpredictable and serendipitous effects that my fabrics reveal as I pull character from them through processes like dyeing and discharge. The fabrics reveal the same kinds of weathered and abraded textures that mark rural topography.
I create groupings of manipulated fabrics and then join and layer them so that compositions build naturally and organically, each fabric responding to its foundation and the foundation, in turn, adjusting to the overlay. Often, foundation surfaces are delineated by grids, sometimes wide sometimes narrow, and these mark off the surfaces of my works as pastures and farmland mark off the rural landscape. Thread makes its way tentatively through these fabrics and these grids, marking pathways not unlike the meanderings of grazing stock or random progress of a creek or stream.
I am interested in the tension created between the natural topography of a place and the manmade modulations that alter it in the name of agriculture and rural and urban development. I’ve tried to bring some of that tension into my work.  I play with edges and boundaries, bringing multiple terrains together, similar to how cultivated and uncultivated terrains, and their respective patterns of growth, appear when viewed from 5,000 or 10,000 or 20,000 feet up." 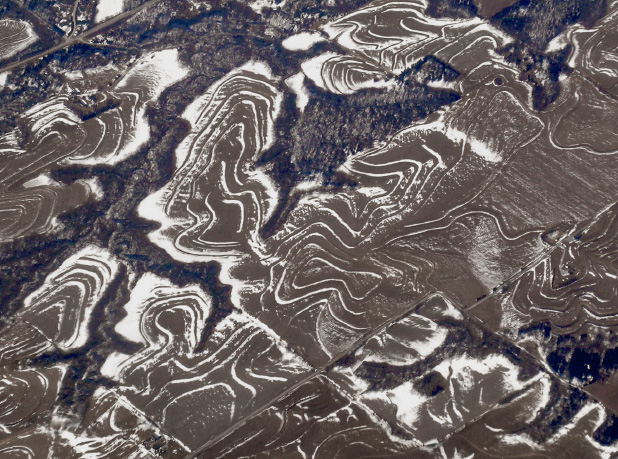 "There’s sometimes a suggestion of mapping in my work. And in the way that some of my works seem to unfold, a recurring reference to book forms and folio spreads. Their stitches and marks aren’t legible in the way that type is, but they allude to forms and figures that might be readable in some other context.
These pieces use centuries-old Japanese ‘shibori’ processes as well as African resist dyeing methods used to create ‘adire’ and other cloths. I experiment with different ways of folding and stitching the fabric in response to what’s happening in the dyeing and discharge baths. These experiments often lead to unexpected and one-of-a-kind effects that I can’t ever duplicate in quite the same way. In this sense, the works are partly accidental, partly intentional.
One feature of these discharged fabrics is the after-image of the stitched line that held the folded or pleated fabric before it went into the discharge solution. I especially enjoy these ‘ghost’ lines. The additional hand embroidery and stitching that I work into and through the fabrics after they’ve dried plays off, or with, these faint traces in a kind of quiet dialogue.
I mount my works in shallow, open boxes where they are suspended just out from the wooden surround. I feel that fabric needs to be seen without the interference of a glass plane and the resulting diminishment of its saturation. This is especially important with whatever remains of the black fabric itself. This black seems to me to be at its fullest when seen without the intervention of a protective layer of glass.

"The stitched resist dyeing techniques that I’ve been using often produce soft, slightly out-of-focus effects. These sometimes result in a kind of luminosity, or a kind of hazy glow, that suggest to me the first light of dawn or the waning light of late afternoon. This kind of light lowers visibility and softens the landscape. There’s an intimacy to even the broadest landscape in these moments. For me this connects with the intimacy of the processes and materials I use in creating these textile constructions. Throughout their making I have moments of awareness of their strength and their fragility, of their responsiveness and their resistance to those manipulation processes, and of my flip-flopping roles as both the maker and recipient of their own spontaneous and often accidental metamorphoses.
Fabric has been my means of expression ever since I was a young child. I made it the focus of my professional life for nearly twenty-five years, and now it’s the focus of my creative life. It interacts with all of my senses. It’s not only its tactile appeal that entices me to return again and again, but the magic that it promises, and the many moments of awareness that it brings.”

"After living all of my life close to the deciduous forests of New England and the relatively confining prospects that they offer, it was invigorating to find myself in this part of the country where expansive vistas and broad sweeps of sky are the norm. Viewed from above, these landscapes reveal intricate pattern structures, the marks of human industry etched into the sustaining earth.
I created a body of work intended to evoke these incidental earth maps and to reference place and how human beings become intimate with the places they occupy. My current work builds on these interests, but the passage of time and the movement of light across landscape have become subthemes.
The stitched resist dyeing techniques that I’ve been using, while fairly unpredictable in their results, tend to produce soft, slightly out-of-focus and luminous effects, and these suggest to me the waning light of late afternoon that lowers visibility and softens the landscape. There’s an intimacy to even the broadest landscape in those moments, and it connects for me with the intimacy of the processes and materials I use in creating these textile constructions.
I’ve built on centuries-old Japanese shibori processes, as well as African resist dyeing methods used to create adire and other cloths, to develop my surfaces, and have experimented with different ways of folding and stitching the fabric in response to what’s happened in the dyeing and discharge baths. I’ve been able to duplicate some effects; others are unique and one-of-a-kind, dependent on variables that I can’t always reproduce. One feature of these discharged fabrics is the after-image of the stitched line that held the folded or pleated fabric before it went into the discharge solution. I especially enjoy these ‘ghost’ lines, and the additional hand embroidery and stitching that I work into the fabrics after they’ve dried and been opened and pressed, plays off or with these faint traces in a kind of quiet conversation.
Fabric appeals to our sense of touch, and this remains for me the strongest appeal of this medium. Every fabric has a different hand and drape, and responds in its own unique way to surface embellishment and manipulation. So, to have a needle trailing its length of thread in my fingers, guiding its point along a line or across a weave or through layers of overlaid fabric swatches, is as natural and satisfying and fulfilling to me as the draw of a paint-loaded brush across canvas must be for a painter, or the push of the point of a burin into a metal plate for the engraver." 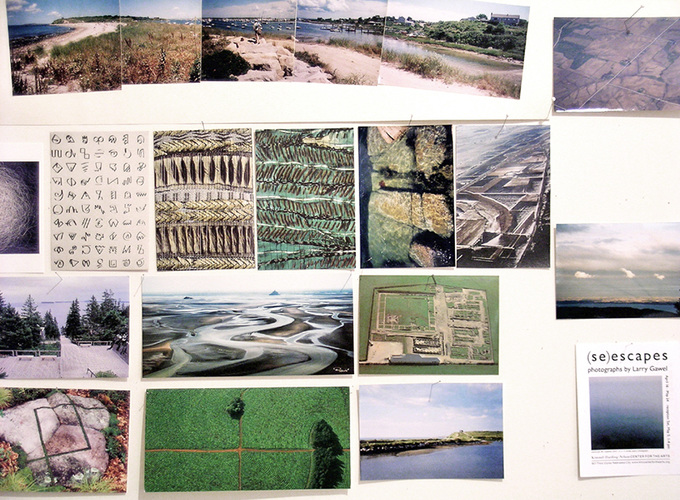 "On the wall above the computer in my studio is a collection of photographs and postcards. They provide inspiration and allow me to recollect the sense of a place I've experienced in different parts of the world.
Many are the landscapes or earth views I treasure the most  - the horizon viewed from the top of Cuttyhunk Island off the Massachusetts coast, where we have visited each summer for twelve years. This image and others seem to contain an intensity of light or a distant view or the soft out-of-focus appearance suggesting the waning light of late afternoon, that lowers visibility...
Working with black or near-black fabric, I try to bring out the light  - in layers of transparent and atmospheric effects, to produce a sense of three-dimensional space. Photographing the landscape from an  airplane window or simply peering at it as we take off from the Lincoln airport, contemplating how the patterns and details change as we rise higher and higher from the earth – I am endlessly fascinated by the patterned fields and the occasional meandering river.
One of the postcards on my wall – an aerial photograph of an ancient Roman town I visited years ago in the north of England...
The natural topography of rivers and streams or the manmade topography of center pivot plowed fields – all these have influenced my work.

"Using stitched and folded resist dyeing techniques adapted from Japanese shibori and African adire traditions...The discharge process of removing color creates a soft blurry image that is evocative of atmospheric occurrences in the natural world. I also play with the clear traces of the sewing needle that remain visible on the fabric after the thread is removed. This effect is clear in works like “Folio” (2004) - the organza “page” is draped against a textured surface. It is unreadable, suspended from a strip of stitched and discharged paper..." 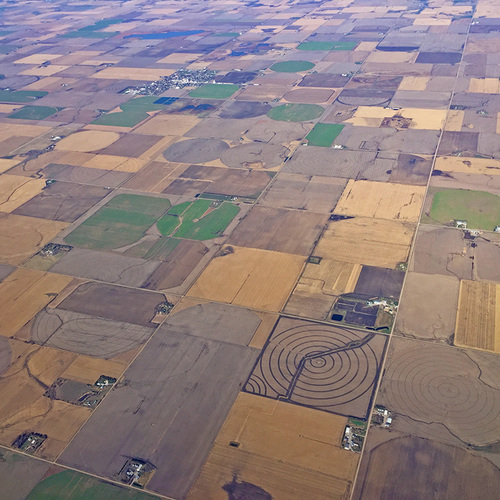 All artwork © The Estate of Judith Dionne James